Live Into The Answer

“I just wish I knew how this was all going to shake out.”

After weeks of deliberation my client, Susan, has accepted a new job in her firm reporting directly to the president, whom she likes and respects. She’s chilling the champagne but the move is risky. The product she oversees will require more funding from the board and she has six months to build a case.

Susan thrives under pressure and her career is full of risky moves that paid off, not always in the ways she expected. This period is different because she’s also going through a divorce and moving to a new city. Her financial picture and where she will live are unsettled. Intuitively she feels liberated and I swear she looks younger, lighter. She feels her life is “going in the right direction,” even though this will go down as one of the most stressful periods of her life.

Let’s face it, every new beginning has uncertainty built-in.

Without exception, everyone I have ever met or worked with who has been up to anything admirable or interesting has found themselves in that Blank Stare place, when your Next Best Step isn’t clear, or you can only see one step ahead. The way through that phase is to loosen our mental grip on how things should be and cast aside the need for guarantees, which don’t exist anyway. Susan traded in her sensible and strategic plans for the willingness to follow a sixth sense that is tugging her into a new direction.  She’s putting feet to her prayers.

Moving Beyond Planning to More Living
When all is said and done, a meticulous, well-thought-out plan can only take you so far. In fact, detailed plans can be unintentionally limiting, leaving little room for grace and magic. In the words of writer, Daniel Pink, sometimes we need “less planning and more living.” Check out this 15-minute commencement address Daniel Pink gave last month at Northwestern University.

A Modern Day Rilke
This talk is sort of a modern day version of Rilke’s Letter to a Young Poet where he admonished to “love the questions and live into the answers.” Daniel Pink graduated as a linguistics major and intended to use his subsequent law degree to run for political office. Instead, he became a New York Times best-selling author and worked at the White House as Al Gore’s chief speechwriter. He had a front row seat to history. Would that have happened if he’d stuck to his plan? More important, would he be happy if he hadn’t followed the unexpected path the opened up?

The Risks of False Certainty
Yes, Pink acknowledges the risk of planning less, but says there is an even greater risk in “choosing false certainty over genuine ambiguity.” The good news: if you can make peace with ambiguity and stick your neck out there just a bit, you might find it is not as scary as you feared. Living in alignment with your values and following your intuition always turn out well. Ironically, it also leads to feelings of grace and equanimity, the kind Susan is experiencing.

Saying Goodbye to the Old
This is where Honorable Closure comes in. Living this way often requires saying good-bye to old ideas about what is possible for yourself, or leaving workmates or ending a relationship that has run its course. Clean, skillful departures set us up well for our next endeavor, unencumbered by regrets.

And while these endings can be poignant, it’s also a sign things are working. There’s no doubt that everything does end eventually. When it’s over, it’s over.

Here’s A Question to Live Into
After you enjoy the video above, I’d encourage you to ask yourself the same question I posed to Susan:

How might not knowing how everything is going to turn out work to your advantage? 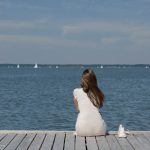 Can You Have Closure with Cancer?Gratitude, Honorable Closure (HC)